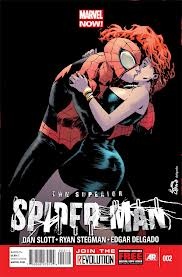 This issue begins with Spider-Man getting a public thank you from the college dean and Mayor J. Jonah Jameson.  He and Mary Jane goes out a few times but he got nothing more than a peck on the cheek at the end of each date.  As for patrolling the city, Peter Parker (you know he’s really Otto Octavius right) constructed spider-bots and placed them along his usual routes.  He keeps track of them with the patrol app he created.

MJ’s nightclub was raided (the first spider-bot alert) by vultures but she was saved by Spider-Man.  There was a tense moment between the two of them, but Spidey realized it was time to to let her go.

The story ended with Mary Jane telling Carlie about what happened between she and Spider-Man, then Carlie had a flashback of Doc Ock telling her that he was Spider-Man (ASM #700).

Superior Spider-Man #2 is well written, thanks to Dan Slott.  This issue couldn’t have been better.  Every page is a page turner, and I don’t say that often.  The pacing is perfect.  I like how Peter Parker is still around, although in spirit.  He follows Doc Ock and tries to dictate his every move.  Too bad Doc Ock can’t hear him.  I laughed so lough and hard while reading this issue.

Ryan Stegman did a superb job on the artwork.  I especially like the cover page and the splash page of Spidey and MJ, with Peter Parker in the background!

If you haven’t already started reading Superior Spider-Man then I highly recommend that you start.  I feel it’s the best Marvel Now! title I’ve read so far.