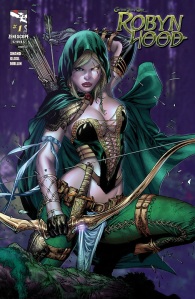 Don’t let the cover fool you. Robyn Hood, by Zenescope Entertainment, actually takes from the rich and gives to the poor.

Robyn is from the Realm of Myst. It was intended for her to be killed as a baby, but her life was spared and she was taken to Earth. There she was raised as an orphan. Although she grew up with problems at home and at school, Robyn was able to manage to have compassion for others without a struggle.

After an unfortunate accident between Robyn and a group of students from the ritzy high school she attended, she was transported back to the Realm of Myst. There in the city of Bree, she goes up against King John in order to free the people from his evil reign.

Robyn Hood is a great series. Action, fantasy and fairy tales. Robyn is both good and bad at the same time. A beautiful and compassionate young lady that can kill you with a single shot from her bow and arrow. Despite not having any knowledge of her true background or destiny, she can sense that she was sent to Bree for a reason. This comic is well-written and flows flawlessly at a rapid pace. I love the interactions among the characters. This is a mini-series with five issues so it’s a very good read for those that are new to reading comics.

Pat Shand did an excellent job with Robyn. She’s not your ordinary sassy teenage girl with a bow and arrow. Reading the comic will give you a deeper understanding and appreciation for the new and improved Robyn Hood, as told by Shand. Of all the Zenescope titles I’ve read, Robyn Hood is the most compelling character so far.

The art is great at times. Other times it’s okay. Dan Glasl is behind the pencils and Tom Mullin is behind the colors. Either way, the artwork backs up the dialogue to make it a good comic.

I highly recommend Robyn Hood. If you like action, fairy tales and fantasy, then this is the comic for you.