The Fearless Defenders #1, a new Marvel NOW! title, was released yesterday. Although the team, I mean non-team, will grow as the series progresses, this issue introduced its’ leaders, Valkyrie and Misty Knight.

Misty and Valkyrie were brought together by chance while taking on dead Vikings. Misty swiped an ancient Asgardian artifact and turned it over to Dr. Annabelle Riggs. The artifact turned out to be an Asgardian messenger spirit. Somehow the messenger was activated and began to sing.

The spirit awakened the dead Vikings from the Viking grave; the survey site of Dr. Riggs and her crew.

As Misty began to fight the dead Vikings, Valkrye arrived and joined forces with Misty. The story ended with Valkyrie, Misty and Dr. Riggs preparing to go on a dangerous journey. Valkyrie warned that the messenger said the Doommaidens were rising and that it was Valkyrie’s fault. 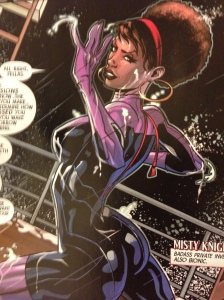 I AM PROUD TO SEE A BLACK KICK-ASS FEMALE SUPERHERO IN THE FOREFRONT. This is rare. Storm is the only black leading female superhero that I’m aware of within the Marvel Universe.

We already know there’s a lack of black comic writers, male and female, in the comic industry. But to take a strong, black B-list female and put her in the front is definitely worth praising Marvel a thousand times. Well, more than a thousand I should say. I give Marvel my utmost respect at this time.

Misty’s style and appearance is what I’ve been looking for in comics for years. In a leading black female superhero, that is. Sharp, attention-grabbing costume, nice shape and beautiful looks. Not to mention a sassy attitude. Come on now, this girl don’t play. She takes shit off no one.

As a black female, I can fully appreciate this extraordinary woman being selected as a leader of a powerful team (I know, I know…non-team). For as long as I can remember, I’ve watched the comic industry to see if a black female superhero, besides Storm, would be given a chance. And now it has happened. 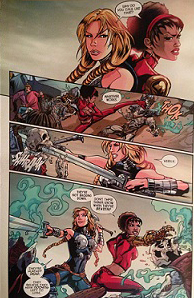 Not only did Cullen Bunn bring two badasses together, he also brought two badass girls from two different worlds. He did a superb job at pulling that off.

The only thing I didn’t like in the story is the kissing scene. The panel where Dr. Riggs kissed Valkyrie. That scene shouldn’t have made the cut. It didn’t fit into the story. See my More Storytelling and Less Politics Please blog.

Come on now. She met Valkyrie. She should have ran back inside that tent and grabbed her camera. The camera she used to record the messenger spirit. She should have held a photo session, autograph session or something of that nature. The background glow made the scene even worse.

Will Sliney and Veronica Gandini did an excellent job on the interior pages. I found each panel to be finely detailed. Great costumes. I especially like Misty Knight’s appearance. Her facial features, especially her eyes, appear lifelike.

I did a little research about Valkyrie and Misty Knight before the title was released, so I knew in advance the Fearless Defenders was going to be led by two strong, kick-ass women. I plan to read further about these two. Whenever I read a good story with characters I know little or nothing about, I always try to read upon and study their backgrounds to learn more about their histories.

If you can’t tell by now that I HIGHLY RECOMMEND this series, then you need to read this review again from the beginning. Especially the parts about the well written story and the excellent artwork.