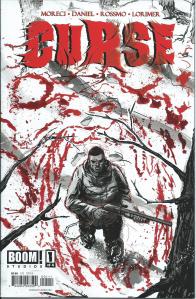 This debut issue of a 4-part mini-series has already grabbed my full, undivided attention.  Published by BOOM! Studios, Curse is a horror story, with themes of survival, family values, and self-worth.

Laney Griffin will do anything for his chronically ill son, Jaren.  A former football player, Laney resorts to selling his memorabilia, and re-financing his home to pay for Jaren’s medical treatments.  When a bounty is placed on a murderer in his community, Laney engages in a nightly hunt to track down whatever it is that’s been killing people and animals.  Laney comes face-to-face with the murderer, and discovers that it’s a werewolf.

This horror story is written by Michael Moreci and Tim Daniel.  I am familiar with Moreci’s writing from Hoax Hunters, so I knew this horror comic would be worth reading.  Well-written script with great interactions.  Pacing is a little slow for a mini-series, so I’m anxious to see how the story will unfold over the next three issues.  Dialogue between Laney and his sister-in-law, Crystal, is heartwarming.  Crystal wants to take legal guardianship over Jaren, but Laney refused the offer.

I don’t recall when I last read a werewolf story, and since I’m a horror fan (especially werewolves and classic vampires), I plan to follow Curse to the end.

I definitely recommend this horror mini-series.  This debut issue gets a 4.5/stars.

You may watch them everyday on Cartoon Network.  Now they have their own comic book series.  Regular Show #1 is just as funny as the television cartoon.

The debut issue of this new comic book series, by BOOM! Studios, has all the main characters in the story:  Rigby, Mordecai, Benson, Skips, Muscle Man, and High Five Ghost.  The story has all the elements and quirks as the cartoon series.  Mordecai gets on Rigby’s case (you know Mordecai is the sensible one out of the two).  Muscle Man creates chaos.  Not only is Skips always knowledgeable about chaotic events, he always has a solution to the problems.  And what would Regular Show be like without Benson yelling “Get back to work!”

The gang is at an outdoor benefit concert when Muscle Man starts a mosh pit, which eventually gets out of control.  Now Rigby, Mordecai, Skips and Benson have to find a way to get Muscle Man to stop moshing.

If you are a fan of the Regular Show cartoon, then you will want to grab a copy of this issue and start reading.  I’m a fan of the cartoon and reading the story was just as funny and entertaining as watching it on television.

The story is written by KC Green.  A very easy to read, all ages comic.  Silly and funny just like the show.

Art is done by Allison Strejlau and colors by Lisa Moore.  Good visual storytellers.  The characters are drawn true to the cartoon, a major selling point.

I recommend this title, especially if you are a Regular Show fan.

Adventure Time with Fionna & Cake is a 6 issue mini-series published by BOOM! Studios, written and illustrated by Natasha Allegri. The series is currently on issue #3.

The characters in Fionna & Cake are gender swapped versions of Adventure Time.

This series is definitely written for children. There is not much dialogue and the words are large print in big bubbles. It reminds me of the “Ready to Read” books. You know the books that are number or color coded according to reading levels for the younger kids (pre-k through chapter books).

I like the artwork. I think Fionna, Cake and the baby fire lions are cute.

The only reason I’m going to buy the last three issues is for my kids. They like anything related to Adventure Time and I’m going to support them.

Adventure Time Fionna & Cake is not a comic for adults. It is geared towards kids. Unless you plan to buy the comic for young children, then I don’t recommend it at all. 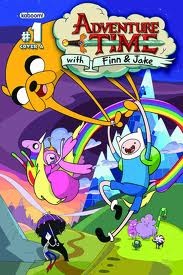 Finn and Jake, Bubblegum Princess, Marceline, Lumpy Space Princess, Beemo and the Ice King were all strange and funny as always.  I’ll briefly review the first story arc which consists of issues 1-4.

The Lich has escaped and returned to seek revenge on everyone.  He has a magic bag that when opened, everything is swallowed into it.  His plan was to get everyone into the bag and throw it to the sun.  Once inside, the characters all land in different parts of the world inside the bag.  Finn and Jake landed in the same spot because they landed as a team.  They were in the Jakesuit.  The Ice King landed nearby.  Bubblegum Princess and Marceline landed on an island.  The entire Land of Ooo was swallowed.

The Desert Princess is a character I found to be very funny.  Although she’s made out of desserts, she claims to be the Desert Princess because of all the things she can do and make with sand.  She also had a crush on Finn.  The Ice King was looking for a wife and proposed to the Desert Princess.  Lumpy Space Princess was hilarious.  She was talking on the phone the entire time she was being swallowed into Lich’s bag.

Everyone worked together as a team to defeat Lich.  Finn, Jake and Marceline used battle burns against Lich.  Battle burns is a way of using words to fight instead of getting physical.  Finn and Jake learned to battle burn at the beginning of the story from Beemo.

The story is very well written.  The art (Shelli Paroline, Braden Lamb) is great.  There are comments from the writer, Ryan North, at the bottom of some of the pages.  They’re either references or just plain old funny remarks.  There’s also a mini comic at the end of the issues that are funny as well.

Adventure Time is a must read comic.