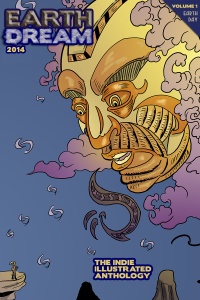 If you’re looking for an Earth Day activity (or even if you’re not), then a great way to celebrate is by reading Earth Dream (Vol. 1):  Earth Day.  Earth Dream is a sci-fi fantasy anthology that includes 11 short stories by indie writers and artists.

Earth Dream, produced by indie comic publisher, 7 Robots, focuses on social awareness.  This year’s spotlight is on the environment.  The anthology is available online every year on Earth Day, and it’s FREE.

With indie creators like Suzie and Miguel (Super Corporate Heroes), Jerome Walford (Nowhere Man) and Johny Tay (Seven Years in Dog-Land), I knew Earth Dream would be nothing less than superior.

All of the stories are wonderfully crafted, and each writer has his or her own unique writing style.  A couple of the stories appeared to be vague to me, I had no idea as to the meaning.  But that’s okay.  The art made up for it.

The artwork is stunning.  I could have used the entire anthology as a picture book.  As with the writers, each artist has his or her own unique style.  Some of the pages were so breathtaking, I had to look at them more than once.

I found the following stories to be of exceptional quality, whether script, art or both:

By getting your free online copy of Earth Dream from indie comic publisher, 7 Robots, you are not only helping to celebrate Earth Day 2014, but you are also supporting the indie comic industry.  The talented creators of this great collection of short stories are from the U.S., Spain, Singapore, Canada and Poland.

For more information and to download your free copy, visit www.7robots.com/earthdream

I truly enjoyed reading Earth Dream, and I’m looking forward to reading more from these talented creators.  The indie comic market is growing, and my support for the industry is growing as well. 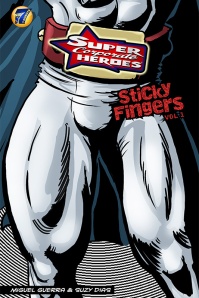 The title, Super Corporate Heroes, tells it all.  This hilarious comic, the first of four volumes by indie comic publisher, 7 Robots, Inc., grabbed my attention within the first pages.

In this alternate reality, non-profit superheroes is a thing of the past, thanks to powerful companies and wealthy lobbyists.  Superheroes are now required to have a license, and work for an insurance company.  Superhero, Inc. is a large insurance company, and is the only company registered to legally distribute superhero licenses.

The superheroes work for Superhero, Inc. and they receive a paycheck.  They receive their assignments from the call center dispatchers.

People have to pay to be rescued.  If they don’t have rescue insurance, then they are offered a selection of packages by the rescuing superhero.  And superheroes are required to not perform a rescue if a purchase is not made.

The pages below are from the beginning of this hilarious mini-series.  Sir Shroud has to go over the legalities, before he can rescue a man from a burning building. 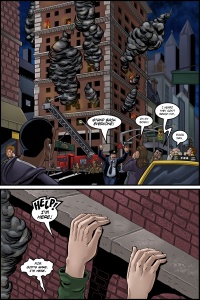 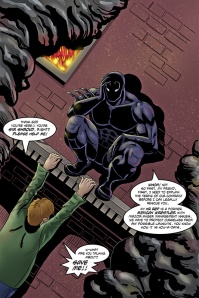 The people are able to pay by cash and credit cards.  Personal checks are not accepted.  The superheroes travel with a credit card reader, and they even print receipts.

When people don’t make their insurance payments on-time, they are paid a visit by the insurance collectors, Meerkat and Big Brother.  You are forced to pay one way or another.  In other words, pay or die. 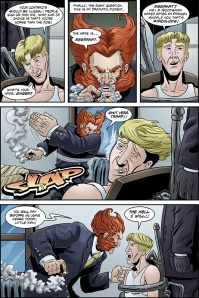 You have to pay even if you don’t use your rescue(s).  You sign a legal contract when purchasing rescue insurance.  Therefore you are bound by its terms.  The man in the picture above, getting tortured by Meerkat, refused to pay because he didn’t use any of his rescues.

The package rates are so high, that you’re probably better off handing your wallet over to a thief. 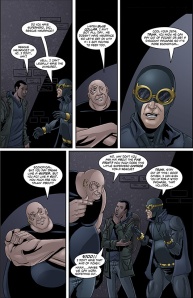 I was impressed after reading Super Corporate Heroes (Vol 1): Sticky Fingers.  Miguel Guerra and his better half, Suzy Dias, are the writers of this phenomenal story.  Character interactions are amazing.  Although this is a superhero comedy, dialogue is motivational, strong and realistic.  Guerra and Dias mixed comedy with real-life situations, and produced a great story that will have you laughing, angry, and crying at the same time.

Guerra also provided the visuals.  The panels are drawn to perfection and finely detailed.  Character facial expressions are so life-like, my emotions were sparked several times.  When I look at the cute, but arrogant American Icon (who’s always smiling, by the way) I just want to punch him.  Blue Collar can easily generate sympathy from caring and compassionate females.  He’s hardworking and runs his body to the ground, trying to stay afloat with his finances.  I just want to give him a consoling hug.

If you’re looking for new comics to read, I highly suggest that you jump on this indie comic.  This title focuses heavily on politics, about who gets what in a society.  Discrimination, wage inequality, corporate greed and control, and monopoly are some of the themes in this comic.

Some of my favorite characters are:

With any superhero story, there has to be a villain.  Invisible Hand is the mastermind behind all the mass chaos.  He’s incredibly wealthy, powerful, controlling, and possess superhuman abilities.

For more information on this title or Guerra and Dias’ other creations, feel free to visit their website at www.7robots.com.

I definitely plan to read the entire series.

There is no doubt that I strongly recommend this mini-series.  Super Corporate Heroes (Vol 1):  Sticky Fingers gets 5/5 stars.