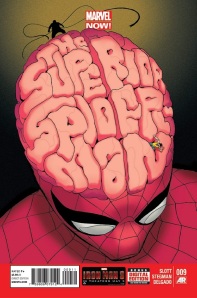 A dying Otto Octavius, aka Doctor Octopus or Doc Ock, found a way to switch bodies with Peter Parker.  Having gained the memories, powers and skills of Spider-Man, Otto now realizes the responsibilities that comes with being Spider-Man.  Otto vowed to be a better Spider-Man.  A smarter Spider-Man.  SUPERIOR SPIDER-MAN.  However a small piece of Peter Parker is in the brain of the Superior Spider-Man.  Stuck in Otto’s brain, Peter is forced to watch Otto live his life and trying his hardest to keep Otto in check and out of trouble.

In the last issue, the Avengers forced Spider-Man to undergo extensive testing and evaluations because of his erratic behavior.  Test results did not reveal an imposter and Spider-Man was released with probation.

Seeing an anomaly on his brain scan, Spider-Man went to the H.E.A.R.T. Clinic to take back his neuro scanner that was stolen by Cardiac.  Spider-Man learns a little girl was severely brain-damaged during one of his schemes, so he performed surgery on the girl and saved her life.  Borrowing the scanner from the clinic, Spider-Man returned to his lab to study the anomaly in his brain.  He discovered the tiny fragment is Peter Parker!  Otto informs Peter that he is aware of him and that he plans to extract him from his mind once and for all.

The entire storyline in The Superior Spider-Man #9, a Marvel NOW! title by Marvel Comics, is about the lobectomy, and its’ outcomes, performed on Otto to destroy Peter Parker.  Or Peter Parkerectomy, as Dan Slott, writer, coined in the last issue.

Without giving any spoilers, I will just say that this issue is full of surprises.  I am amazed at the scope of this storyline.  The events that take place in this issue are breathtaking.  Action packed.  Adrenaline inducing.  Peter was not going down without a fight, and he and Otto were prepared for each other.  And well prepared they were.

The Superior Spider-Man series is not to be read lightly.  The more I read this title, the more involved I become in the story.  Especially this issue.  Peter and Otto fought long and hard, but I want to set the physical battle aside and talk about the verbal exchanges between the two of them.  Peter came down hard on Otto about his portrayal as Spider-Man.  He reminded him of nearly being fired from the Avengers, and the brutal treatment towards his enemies, including the murder of one of them (I won’t mention the name in case you haven’t read the issue yet).  He was basically telling Otto that he’s not worthy of being Spider-Man and that he should give him his life back.

Otto, however, broke it down to Peter and let him know why he’s the better Spider-Man.  Peter was always slinging around town being the “Friendly Neighborhood Spider-Man.”  Always comical.  Wanting to be loved by everyone.  Not using his powers to its’ fullest extent, he always went easy on his enemies.  Since Otto has been Spider-Man, there has been a reduction of crime in the city.  And he gets full support from the mayor and the police.  Superior Spider-Man has taken down several enemies that Peter Parker went too easy on.  The Vulture and Massacre are perfect examples (again I won’t spoil it in case you haven’t read it yet).

I totally agree with Otto and I feel that he is the better Spider-Man.  He created a device to help Aunt May walk.  He stopped the Vulture from using children as his henchmen.  He re-enrolled in college to take that last credit and write a thesis for his (Peter) Doctorate Degree.  He saved that little girl’s life with the brain damage.  Otto may be a villain, but he is a hero at heart.  He has shown compassion far too many times for it to go unnoticed.

The Superior Spider-Man #9 is probably Slott’s best issue yet.  Well written and engaging dialogue.  Phenomenal character interactions.  Compelling characters, especially Otto.  A lot of information is packed in this fast paced story but it’s not hard to follow.

Superb artwork by Ryan Stegman (artist) and Edgar Delgado (colors).  These two are great at visual storytelling.  I especially like the cover.  Hmmm, I wonder if the layout of my brain spells my name.  Ummm that’s okay.  I don’t want to find out.

There is no doubt that I will continue to read The Superior Spider-Man.