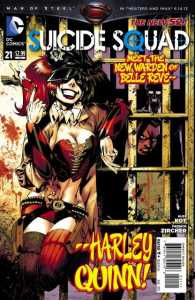 I began reading this New 52 title with the last issue (#20) and was instantly hooked.  I had no choice, it’s dark and full of nonstop action.

Belle Reve Penitentiary is a prison for super-villains.  Select villains have a chance to reduce their sentences by participating in a government program.  Known as the Suicide Squad, the team performs deadly missions.  Tiny bombs are implanted in their necks to keep them in check.  Amanda Waller, the woman I love to hate, is Belle Reve’s director and the overseer of the Suicide Squad.  And she’s her usual conniving and manipulative self.

A riot takes place at Belle Reve and Harley Quinn appears to be at the center of it.  Although Harley Quinn is looney, she exhibits a bit of intelligence.  However I do not believe that she is the mastermind behind the attacks at the penitentiary.  Other key players in this story are Deadshot, Cheetah and James Gordon, Jr.

This story is action packed from the beginning.  The characters are funny, scary and serious all at the same time.  I definitely plan to continue reading this series to see where it’s heading.

Ales Kot is the writer.  Well written dialogue and easy to follow.  I love the character interactions, especially Harley Quinn and Amanda Waller.

Patrick Zircher is the artist and Jason Keith is the colorist.  This team did a great job on the artwork.  Lifelike characters.  I especially like the realistic facial features of Deadshot and Amanda Waller.

The only complaint I have is the look of Harley Quinn.  She is one of my favorite characters in this series, but she looks too psychotic.  I know she is mentally unstable but her appearance seems a bit exaggerated.  This is only my second issue of reading this series, so I’m sure I’ll grow on her look.  I know that I’ll appreciate her appearance more once I get more issues under my belt and learn a bit more about all the characters in the story.

I recommend Suicide Squad, a New 52 title by DC Comics.