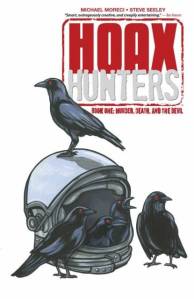 If you’re a fan of television shows like X-Files, MythBusters and Ghost Hunters, then this is the perfect comic series for you.

Hoax Hunters is a reality television show that debunks stories and sightings of monsters, aliens and cryptids. But the show is actually a cover-up. The creatures are real and they’re either protected or eliminated by the hunters.

Members of the Hoax Hunters:

I didn’t know too much about this title, published by Image Comics, until I met Michael Moreci and Steve Seeley during my visit to Motor City Comic Con back in May. They are the creative writers of this dark, sci-fi, mystical, scary and fun series. Not only were Moreci and Seeley very friendly, but they also took their time explaining the series to me. Since I am a fan of dark, horror, sci-fi, monsters, aliens, ghosts and all the other dark and creepy adjectives, I bought both trades.

I cannot wait until September to get my hands on the next issue. I was immediately hooked after reading both trades. The monsters, gnomes, and the possessed girl in the haunted house are all real. But there is an underlying mystery, as well. Jack is left in the dark about his father, who was not only a Hoax Hunter, but his whereabouts are unknown to Jack.

I have never read such believable fiction until I read Hoax Hunters. I’m starting to believe that cryptids do exist. Okay I’ll confess, I’ve ALWAYS believed that Sasquatch (Bigfoot) existed. And the Abominable Snowman. Does that make me an honorary Hoax Hunter? But this is why I am enjoying the series. Debunking myths and legends in front of the camera, while secretly dealing with them in reality.

The main characters are compelling, yet complex. Jack is the tough guy with the muscles. Regan is probably the most powerful. Ken is quiet, mysterious and haunted by his past. Murder can’t talk but somehow his teammates know what he’s saying. Their interactions with him are funny, except when he’s alerting them of danger.

By the way, be careful when you’re around Donovan, the show’s producer. He’s not one to be trusted.

JM Ringuet, Axel Medellin, Emilio Laiso, Brent Schoonover, Charo Solis, and Rosario Costanzo are the creative artists on these stories. Excellent visual storytellers. I have no complaints in this area at all. The entire art team deserves a round of applause.

I found a couple of resources that keep readers up-to-date on the series:

This title is a creator owned series. Therefore, we as readers need to spread the word to buy single issues. DO NOT WAIT FOR THE TRADES TO BE RELEASED. The continuation of comics is dependent upon its sales of singles. This is not Batman, X-Men or some other big named title. There are no big gun names attached like Geoff Johns, Brian Michael Bendis or Dan Slott. Therefore, this title is harder to sell. It’s up to the readers to keep this series going. I buy singles AND trades because I only like to read my singles once. No fingerprints or smudges are allowed on my books.

I became an instant fan and loyal reader of Hoax Hunters and I plan to continue reading the series. I also plan to help market this title by talking to customers and staff at the comic shop and posting on the social media circuits.

It should be more than obvious that I HIGHLY RECOMMEND THIS TITLE.