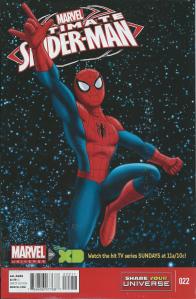 Even though I am not a fan of Peter Parker, I couldn’t refuse my son’s request, I mean command.  He didn’t ask, he TOLD me that I had to read and review this issue because the Guardians of the Galaxy were in it.

Rocket Raccoon and Sam Alexander, aka Nova, takes off on a dangerous mission.  Peter runs after them, not knowing that he would end up in deep-space to help the Guardians save Earth from Korvac and the Chitauri.

This was a fun issue to read.  Star-Lord, Gamora, Rocket Raccoon, Drax the Destroyer, Groot, Nova, and  Spider-Man.  This is one kick-butt team (this is a comic for kids so I’m watching my language).  By the way, apparently Spider-Man wasn’t aware that no one is allowed to call Rocket a raccoon, and he made that mistake more than once.

The script, adapted by Joe Caramagna, is very entertaining.  Character interactions were lively, and Spider-Man was being himself, talkative and annoying (well at least he is to me).  I’m not surprised by this great story, as I follow Caramagna on Twitter.  His tweets are lively, and I enjoy scrolling past that one subject I know absolutely nothing about, HOCKEY!  I had always known of two hockey teams, Detroit Red Wings, and the now-defunct Flint Generals.  Thanks to Caramagna, I now know of a third team, New Jersey Devils.

I enjoyed this issue of Marvel Universe Ultimate Spider-Man, it’s been on the pulls for my son since day one.  Now that Guardians of the Galaxy has made a special appearance, I need to go through his back issues to see what I’ve missed.

If you are looking for new comics to read for your children, then I strongly recommend this title.  I am giving this fun comic 5/5 stars.