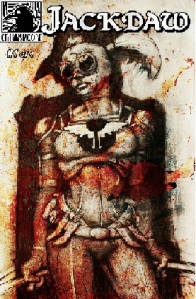 Who, or what, is Jackdaw? 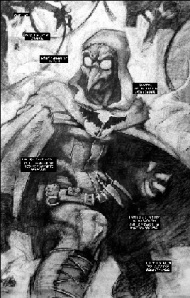 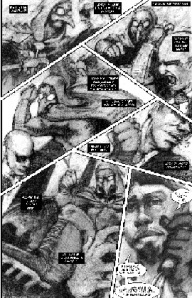 Richard Rael has two jobs.  During the day he is a wealthy businessman.  But at night, he is Jackdaw, a dark and mysterious crime fighter.  Not much is known about Jackdaw.  And Thrasher, his female superhero sidekick, appears to be the only one that knows his true identity.

Joyce Sunn, aka Thrasher, is a graduate student and wants out of the crime fighting business.  However she don’t have the nerves to tell Richard.  Although she suffers silently, she does a good job at being a sidekick.  Actually Thrasher is a badass.

Jackdaw is an online comic, or webcomic, and is also published on Comixology.  This indie comic is published by Grimmsmoore Comics.

Kelly Shane is the writer of this dark, mysterious, and complex story.  Well-written script with good timing.  Compelling characters.  Great character interactions.  I found the story a bit wordy at times, but after reading it a second time, I found it to be helpful.  A lot of information is given in this issue, but it’s not too revealing.  Overall I believe Shane did a wonderful job with the set-up of the story.

Text was brought to life by Brian Barr.  The comic is in black-and-white, and it makes the story even darker.  Finely detailed.  Realistic looking characters.    I especially like the fight scenes.  Barr deserves a round of applause for his excellent visuals.

I plan to read the second issue, if I can ever get caught up on my current comic reading.  I need to find out if more is revealed about Richard Rael’s personal life, and if Joyce finds the courage to tell him she wants out.  And just who is that crazed Jackdaw fan?

It is no secret that I support both mainstream and indie comics.  Indie comic creators deserve a shot just as much as those creating comics for the Big 2.

You can learn more about this indie comic on its’ website.

If you are a fan of mystery, then you may want to give Jackdaw a try.

I enjoyed reading Jackdaw.  I am giving this issue 4/5 stars.