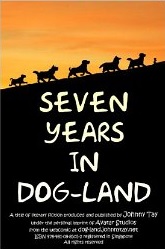 Alice Carroll is a 10 year-old girl who lives with her dad, Lewis Carroll.  Their relationship is cold and distant, and Alice doesn’t appear to have any recollection of her deceased mother.  When Alice’s pet Labrador Retriever, Charlie, runs away from home, Alice takes it extremely hard.

Alice eventually leaves home to search for Charlie.  During her search, she stumbles upon a magical world ruled by giant dogs.  In Cania, the canines talk and sapiens are their pets.  The sapiens resemble humans, but they’re filthy and act like savages.  The enslaved sapiens are used as household pets, circus acts, and whatever else their owners force on them.  The canines even breed sapiens. 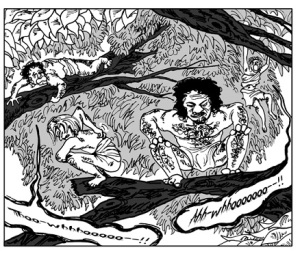 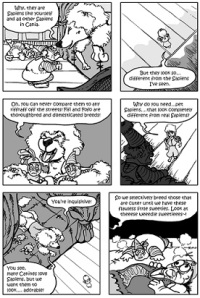 Alice is considered a special type of sapient because of her cleanliness, intelligence, and most of all, her ability to talk.  She is personable, and has caught the attention of Dulac, the sapiens pet trader.  Dulac decides to keep Alice for himself, and he’s as dirty as dirty can get.

Not all of the canines are cruel.  There is an activist group that wants all sapiens to be free.

But will Alice ever find Charlie?  Better yet, will she ever find her way back home?

Seven Years in Dog-Land is an indie comic created by Johny Tay.  Phenomenal script with amazing character interactions.  This enlightening fantasy pretty much resembles our world.  Dogs are kept as pets by humans.  We breed them, dress them up in clothing, and make them perform tricks.  As for selling the sick sapiens to the butcher.  Well, um, I often read about meat recalls.  Sick cows, pigs, green slime, etc.  Anyway, you know what I’m talking about.

The art is in black-and-white, and although I would like to see it in color, it doesn’t take from the story at all.  I especially like how Tay drew Alice to stand apart from the sapiens.  You can definitely tell she’s not one of those savages.

You can read the first half of Seven Years in Dog-Land for FREE online.  Check out Tay’s website for additional information such as a rundown of characters, and ordering information.

I recommend this title for dog lovers, readers of fantasy, or for those that are looking for a good indie comic to read.  I give this title 4.5/5 stars.