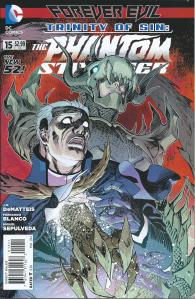 Forever Evil, DC Comics crossover event, is still going strong.  The Crime Syndicate has claimed world domination, and many lives have been lost.  Forever Evil also has a crossover event, Blight.  An 18-part mini-event, Blight’s titles include Justice League Dark, Trinity of Sin: Phantom Stranger, Constantine, and Trinity of Sin:  Pandora.  We’re almost at the halfway mark, as The Phantom Stranger #15 is part 7 of Blight, a dark and gruesome event that involves the supernatural forces of the DC Universe.

We first saw Blight, composed of the billions of sins and evil of the human race, in Justice League Dark #24.  At that time, humankind’s darkness had formed into a dark, giant serpent.  Now it has taken Christopher Esperanza, a young man who Stranger brought back from the afterlife, as its host.

In order for Blight to fully control its host, it needs to destroy remnants of Chris’s human existence, including his family.  The Phantom Stranger plans to free Chris and save his family, but Stranger’s Divine Presence commands him to join, and support Blight.  Stranger confronts a possessed Chris, just as he was about to bring tragedy to his entire family.  Not able to bear witness to Blight wiping out the human presence of Chris, Stranger disobeyed the Presence for the first time.  But it may be too late.  Chris revealed to Stranger that he chose Blight.  Now they are one and stronger than ever.

Meanwhile, John Constantine makes a hologram of the Sea King, in hopes of learning what terrified him before he died and nearly drove Deadman insane.  By the way, Deadman is in the Sea King’s body.  Nightmare Nurse wants to free Deadman, but Constantine refuses to let her break the spell.

Stranger, who is wounded after his fight with Blight, drops in on Constantine, Nightmare Nurse and Swamp Thing at the House of Mystery.  Nightmare Nurse uses her healing powers to help Stranger.  The story ends with Stranger running through a mirror, with the others, including Sea King (remember Deadman’s trapped inside his body) at his heels.

J.M. DeMatteis is the writer of this chilling series.  Crisp dialogue, and phenomenal character interactions throughout the book.  Although a lot of ground is covered at a rapid face, it’s not hard to follow if you’re keeping up with the crossover.  DeMatteis also did a great job with the set-up for part 8, Constantine #10.

I began reading The Phantom Stranger with the Forever Evil Crossover.  I plan to read at least the first arc after the Blight mini-event is finished.  If I like it, then I may have to make some adjustments to my current reading list.  But so far, I am definitely enjoying this title.

This title is perfect if you’re already reading the crossover.  If you have not yet read this title, then I recommend that you read back issues (before the FE crossover) to get a feel for the Phantom Stranger.  Or start with the new arc once the crossover ends.