The Phantom Stranger, Pandora, and The Question.  The three greatest historical sinners have teamed up to save the world, or have they?  Trinity of Sin, DC Comics new ongoing monthly series, has already caught my attention with its amazing debut issue.

As a supernatural and comic book fan, I can honestly say that Trinity of Sin is a comic book worth giving a chance.  With DC Comics titles that stole my heart such as Demon Knights, Constantine, Justice League Dark, Pandora, and The Phantom Stranger, there was no doubt in my mind that I wouldn’t get hooked on this title.

The astounding visuals are provided by Yvel Guichet (pencils), Jason Gorder (inks), and Gabe Eltaeb (colors).  I have nothing but the highest of praise for this team of visual storytelling.

Take a look at the following panels from the creative art team.  I included a page from Question, Phantom Stranger and Pandora, as they each face their terrifying monsters.  Note Eltaeb’s coloring.  Beautiful, yet amazingly frightening. 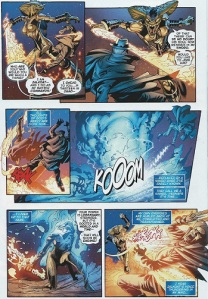 There is no doubt I will continue to read Trinity of Sin, a supernatural title that is already living up to its expectations.  If you are a fan of comic books, supernatural, magic, and entertaining stories, then you definitely need to read this new series.

Even if you are not a comic book reader, give Trinity of Sin a try anyway.  I guarantee you will not be disappointed.

I highly recommend Trinity of Sin, the new ongoing monthly comic book series by DC Comics.  I am giving this issue what it rightfully deserves, 5/5 stars.