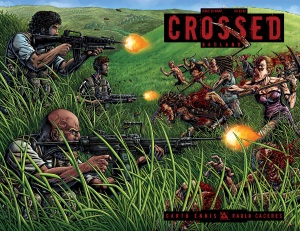 March 13, 2013 was C-Day, a day of celebration for the return of  Garth Ennis to Crossed:  Badlands #25.  Not knowing anything about Crossed, except the title, I decided to read issue #25 and a couple of trade paperbacks to see what the hype was about.

A strange virus has spread worldwide.  Those infected are known as Crossed because of the red cross-shaped rash on their faces.  As soon as the infected turns into a Crossed, all hell breaks loose and the madness begins.   They immediately become murderers, sadists, rapists and cannibals.  If they go so long without torturing the uninfected, they turn against one of their own.  They are able to talk, though their speech is limited and consists of violence, sex and curse words.

There is a handful of survivors across the world, struggling to survive.  Some of the survivors will add strays to their group, while others will rob them of their food, weapons, transportation and any other supplies for survival.

This SICK series is published by Avatar Press.  I cannot believe something like this is in print.  This is beyond horror.  It is also beyond gory.  I just can’t think of a more suitable term for it right now, except for SICK.

As soon as the infected turns into Crossed, they immediately become sex-crazed, murderers, rapists and cannibals.  And they are always smiling and laughing.  They rape, maim and kill adults, children and animals.  They tell you what they’re going to do to you both violently and sexually.  There is no holds barred for anything.  Family members turn against each other.  They also have sex with each other.  And they know it’s  their own family member.  There is one story where a mother was a Crossed.  As soon as her son turned into one, they began to have sex with each other.

The Crossed do everything with smiles on their faces.  A Crossed was being tortured by four other Crossed.  They were ripping him apart.  One was twisting his arm off.  Another was eating his intestines like he was eating spaghetti (you know how we slurp spaghetti one noodle at a time).  Another had ripped his leg off and was licking the wound.  The last one was doing the leg that was ripped off.  You read it right.  F’n a leg.  And all five of them were laughing.

What disturbs me, in addition to all of the above, is that Crossed sits on the shelf in my local comic shop.  But Sex is behind the counter.  I had to ask for it.  I walked right into the store and grabbed Crossed #25 right off the shelf.  The book doesn’t even have a parental advisory disclaimer on it.  This is bad.  This is sad.  Sex #1 is behind the counter (my review shows there was nothing in the story that warranted it being held behind the counter) but this sickening comic book is on the shelf, in plain sight.

I DO NOT recommend this title to anyone.