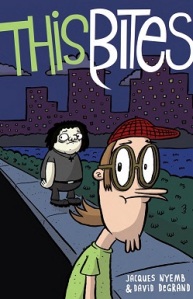 Jasper is just your average Joe Blow, who works at a record shop. But it doesn’t take long for him to undergo a disastrous life-changing experience. While at the supermarket, Jasper sensed that he was being watched. Instead of following his instincts and running, he continued going about his business. Well, not following his instincts caused him to get bitten by a vampire.

When Jasper went into work, his friend noticed he wasn’t looking too well. Jasper eventually confessed that he thought he’d been bitten by a vampire, and the poor guy freaked out. Fearing he would become Jasper’s next meal, he dismissed Jasper as his friend.

Jasper is determined to not turn into a vampire, because he’s a vegan! That’s right, Jasper is a vegan. All alone, Jasper turns to the only trustworthy person he knows, his grandmother! She’s feisty, aggressive, and is determined to help Jasper find a cure.

This Bites is a vampire comedy by Not So Super Comics. This indie comic is funny and will leave you looking forward to the next issue. We need to support our independent comics, just as much as we support the Big 2. Everyone can’t work for high-profile publishers, so we as readers need to support our indie comic creators. I read a variety of comics, indies included. Therefore I will continue to read, blog, purchase and whatever else I can do to help spread the word about indie titles. In addition, it’s good to take a break from mainstream comics, and read something other than superhero vs. super villain.

Jacques Nyemb is the writer of this hilarious script. This is the second comic I’ve read by Nyemb, and what I like about his writing style is that he gets straight to the point. His scripts are not too wordy, and they are very easy-to-follow. This fun comic will have you laughing from the 80’s style vampire to Jasper’s feisty grandmother. 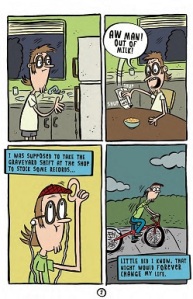 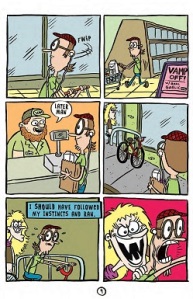 This Bites doesn’t fit my current personal taste, but that does not mean I’m not going to recommend it to those looking for new comics to read, or readers looking for a nontraditional vampire story.

I recommend this title, especially for readers who are looking for a fresh take on vampire stories, comedy style.