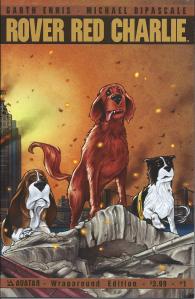 A zombie plague has consumed New York City.  The city is literally burning to the ground, and the feeders (humans) are either killing each other or committing suicide.  Rover Red Charlie is a new mini series by Avatar Press.  This heartfelt tale follows three dogs, Rover, Red and Charlie, as they struggle to survive what appears to be the end of the world.

Garth Ennis is the writer of this captivating series.  Rover Red Charlie is not your average comic.  The story is written from the canines’ points of view, and it’s about survival, friendship and loyalty among three different breeds.  Strong, emotional dialogue that will nearly tempt you to jump inside the comic, and rescue all three canines.  I especially like Charlie, a service dog with strong leadership skills, and the feeder that sacrificed his life for Charlie was heartbreaking.

Michael Dipascale provided the outstanding artwork.  The feeders have detailed facial expressions, but it’s the canines that truly stands out among everything else.  They are all realistic looking and perfectly drawn.

Knowing that I’m always looking for new comics to read, and that I have a comic blog, one of the owners at the comic shop recommended Rover Red Charlie.  I quickly said, “Oh no” when I saw that Avatar Press was the publisher.  When I saw Ennis’ name on the cover, I said, “Oh heck no.  No thank you.”  That’s because whenever I see either name, I immediately associate them with Crossed.  I know that Avatar Press publishes comics that are beyond bizarre, so I didn’t want anything to do with Rover Red Charlie.  Later that day I realized my comic blog is about my honest reviews.  I like to read comics and share my opinions for those looking for new comics to read, or for readers who are looking for a jump-on point.  There’s a comic to suit everyone’s tastes, so for me to not read and share Rover Red Charlie would be discriminating.  I called the comic shop, asked to have the book placed into my box, and purchased it the next day.

I believe that Crossed is the only story that I’ve ever read by Ennis.  I was amazed with his writing in this book, and have decided to read more of his work.  I searched and learned that he’s written comics about a couple of characters I really like, so I’ll be Ebaying and Amazoning it pretty soon to find the books.

Although I was hooked by its debut issue, this title doesn’t fit my current personal taste.  But that doesn’t mean I won’t recommend other readers to give it a try.  It’s definitely worth reading.

I recommend this mini series, especially to readers that are dog lovers, and/or zombie fans.