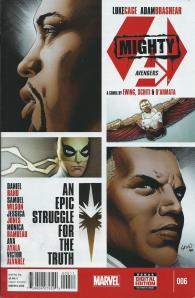 Published by Marvel Comics, Mighty Avengers is a character-driven series.  The series  focuses on the interpersonal relationships of the predominantly minority-led superhero team, led by Luke Cage.

Written by Al Ewing, Mighty Avengers #6 is filled with crisp dialogue, and excellent character interactions.  I especially like the interaction between Luke Cage and Blue Marvel.  I also liked the mishaps of Kenny Driscoll, leading up to Falcon’s intro.

I plan to continue reading the series, especially to learn more about Power Man’s abilities.

The art team consists of Valerio Schiti (artist), Frank D’Armata (colors), Greg Land and D’Armata (cover).  Characters are realistically drawn, and I especially like their facial expressions.  They actually match the dialogue.  I didn’t like Luke Cage’s appearance at first.  I felt he looked too hip-hop.  I didn’t care for the ripped jeans, unlaced shoes, chain loop hanging from his belt, and all those rings on his fingers.  But I didn’t complain much, because I know that just because you dress a certain way, doesn’t mean that you behave in that fashion.  And the Mighty Avengers is a team of intellectual characters.

When I blogged about the debut issue, I stated that Marvel had set this title up for failure.  I still feel that way, but Marvel is not acting alone.  There’s someone else that’s also setting  up Mighty Avengers to fail, its readers.

Supporters of this title need to spread the word about the book.  Get on your blogs, Twitter, Facebook, Tumbler, message boards, and other social media sites and get the word out about this book.  Post about your favorite characters or scenes.  This is a character-driven series.  Talk about their interpersonal relationships.

There is always someone looking for new comics to read, and this is our chance to make sure that this title lands in the hands of those readers.

We all know that Marvel will cancel a title in a split second, so we need to bust our asses and get the word out about this awesome book, before it heads to that damn chopping block.

We also need to make sure that we talk about the creative team.  Al Ewing is a great writer.  We are six issues into the series, but he’s still in the shadows.  That’s because people are so busy complaining about Land, and Monica Rambeau’s hair.

Speaking of message boards, stop posting a bunch of nonsense and talk about your favorite comic books before they get CANCELLED.  I rarely visit message boards.  When I do visit, I don’t always comment because I don’t see any interesting discussions.

If you are a poster on message boards, please post something of intelligence about your favorite comic books.  Many site visitors feel compelled to comment, so this is your chance to facilitate a constructive discussion.

I posted a link to my blog post about Monica’s hair, and of course most of the responses I received were sarcastic.  Yes I said to leave Monica alone, and she should be left alone.  Talk about the damn story, not a hairstyle.

Bring Ewing out of the shadows, and put him up on a pedestal.  He’s an excellent writer, and it’s time to spread the word about his work.   Schiti is a great artist, and hell, even Land’s art is not unbearable.

I created my Tumblr account a few weeks ago.  I still don’t know what I’m doing, but at least I know how to publish a post.  That’s one more social media site for me to blast my support for my favorite comic books.

I also discuss comic books at the comic shop.  That’s a great way to interact with the store owners, employees, and customers.

Comic book readers, there are people looking for comics to read.  Not just new readers, but readers looking for a jump-on point.  We can help them out by spreading the word about our favorite comics, especially low-profile titles.

Mighty Avengers is an excellent character-driven book that I strongly recommend.  This issue gets 5/5 stars.