She-Hulk is a title I had been hyped about for months.  Unfortunately, that excitement vanished before I even finished reading its debut issue.

The story begins with Jennifer Walters, aka She-Hulk, going up for her first annual review at a law firm.  Not only was she told she would not be getting a bonus, she was also informed that she was only hired for her ties to superheroes.

She later meets a potential client who is looking for someone to represent her in a case against Tony Stark.  After being put on the run-around by Starks attorneys, Jennifer decided that it was time for She-Hulk to pay him a visit.

The story was quirky and too comical, not at all what I expected from a She-Hulk title.  I read that Soule intends for the book to be fun, but I would like to see She-Hulk utilized in a more aggressive and mature way.

I was greatly disappointed with the art.  Instead of an attractive woman with a voluptuous body, Jennifer Walters looks like a green, and lanky, alien lady. 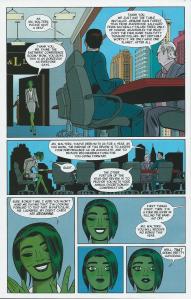 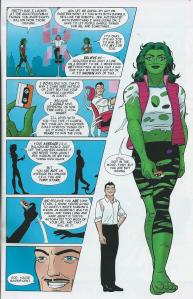 I WOULD PREFER THAT SHE-HULK WOULD LOOK SOMETHING LIKE THIS:

I won’t be reading beyond this issue, as I felt as if I was reading the Sunday comics in the newspaper.

Too bad Red She-Hulk was cancelled.  I enjoyed the story and the art, especially Betty Ross, aka Red She-Hulk, appearance.

Verdict (drum roll please)
I wasn’t impressed at all by this title. I’m giving it 3/5 stars.