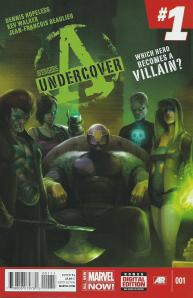 This is a comic book that I went into blindly.  The title and its dark cover (Francesco Mattina) captured my attention.  At the time, I had no idea that Avengers Undercover was a sequel to Avengers Arena.

I wasn’t at all interested in Avengers Arena because it reminded me of Hunger Games.  I watched Hunger Games at the movie theater and hated it.  Children were forced to kill each other.  Avengers Arena was no different.  Arcade, a supervillain, kidnapped 16 superhuman teenagers and placed them in a deathmatch.  That sicko was amused by Murderworld, the name for this reality-type show, that was also aired on television.

Avengers Undercover follows the seven survivors of Murderworld.  However Post-Traumatic Stress Disorder (PTSD) appears to have a tight hold on Cullen Bloodstone, one of the survivors.  He is enraged and obsessed with seeking vengeance on Arcade.  Cullen tracks Arcade to Bagalia, a city that I would not want to live in, and home to Baron Zemo, leader of the Masters of Evil.  The remaining six discover Cullen’s plan and has to decide whether they should brave the dangers of Bagalia and bring Cullen home.

Dennis Hopeless is the writer of this All-New Marvel NOW! title.  Script and pacing are both flawless.  Great character interactions.  The survivors are young badasses, but it’s their distinct personalities and attitudes that hooked me.  Chase is already annoying the heck out of me, but he’s funny.  Cullen is a hardcore badass.  And Anachronism, well, let’s just say I’m still trying to figure him out.

Kev Walker is the artist, and Jean-Francois Beaulieu shows off his artistic skills with the colors.  I have nothing but praise for this great team of visual storytellers.

Avengers Undercover #5 was released last week, and it was the first comic book that I read that day.  The funny thing is, it’s on my husband’s pull list, not mine.  I went through a pile of his comics a couple of months ago.  That’s when the title and cover caught my attention (yes, a cover is a selling point).

I am caught up with this title, and I plan to continue reading this All-New Marvel NOW! series until I get bored.  By the way Hopeless is tearing this script up, I don’t see that happening anytime soon.

I will read Avengers Undercover anytime rather than Young Avengers.

VERDICT (drum roll please)
I strongly recommend this title, and I am giving it 5/5 stars.