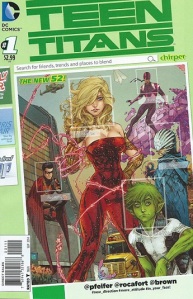 As long as Skitter do not make an appearance, I may be sticking around this title for a while.  The new Teen Titans series is a DC Comics New 52 relaunch.  The title previously launched with other New 52 titles 3 years ago.

The teenage superheroes race against the clock to stop a group of terrorists that has taken over a busload of young female students from a preparatory school.  The Titans, under the direction of their fearless leader, Red Robin, face-off against the madmen, who are armed with guns and explosives.

This cover-to-cover, action-packed issue grabbed my attention from page one.  Wonder Girl stole the show in this one. 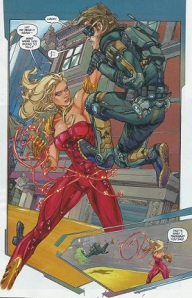 And Beast Boy was not one to be messed with.

William Pfeifer is the writer of this fast-paced action script.  Great script, phenomenal character interactions.  Pfeifer did an outstanding job with story set-up and character introductions.

Nice artwork by Kenneth Rocafort (artist) and Dan Brown (colorist).  I especially like the characters facial expressions, and the emotion-filled panels that caused my eyes to water. I also like the cover.

The only complaint I have about the art is Raven.  I DO NOT like Raven’s look at all.

Although I do not like Raven’s look, I can tolerate it for now.  At least she looks better than Skitter.

Who is Skitter?  She was a black female superhero in the previous canceled Teen Titans New 52 series.  I had a major issue with the way Skitter was drawn.  The white female superheroes were beautiful, but Skitter looked like a giant cockroach.  I was deeply offended, and her look grossed me out.  The title was on my pulls list from day one, but I stopped reading it after the first few issues.

In my honest opinion, which is what this blog is based on, The new Teen Titans has gotten off to a great start.  Powerful story, non-stop action.  Nice artwork, except for Raven.  I plan to read at least the first arc to see where it’s headed.  If I continue to like the story, then I will have to make some adjustments to my pulls to make room for it.

NOTE TO PARENTS:  Teen Titans is a series for teen readers and older.  I do not recommend it for the younger readers.  For the younger children, I suggest the following comics:

I highly recommend this title.  This issue gets 4/5 stars.