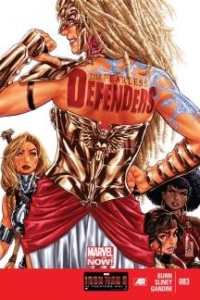 The badass girls of Marvel Comics are back.

Up until now we know that Valkyrie, the demigoddess of Asgardia has failed to select a new group of Shieldmaidens.  Misty Knight was ticked to learn that Valkyrie claimed she couldn’t find any female superheros on Earth worthy to serve on the team.  Now the consequences has to be faced.  The Doom Maidens are rising and Dani Moonstar is being held captive by Caroline LeFay, a villainess who confessed to Dani that she wants to be a Valkyrie.  Carolyn also raised the Doom Maidens.  There is a lot going on in The Fearless Defenders right now, so you need to grab the first two issues, in addition to the current one, if you haven’t already.

My review of issue #1 details why I’m liking this series, and each issue just keeps getting better.

Cullen Bunn, writer, is having fun with this series.  Superb dialogue.  Fast paced.  Character interactions can’t get any better than this.  The different character backgrounds and personalities make this series fun and addicting.

We all know Misty Knight,  the Foxy Brown of comics, has a mouth on her.  Sassy, gun-toting, don’t take sh-t from anyone.  She will  beat you down just for looking at her the wrong way.

Annabelle Riggs.  I didn’t like her in the first issue, but now I’m starting to grow on her.  She’s funny plus I want to see how she fares as a Shieldmaiden.

Valkyrie.  The reason they’re all in this mess. By not assembling a new team, the Doom Maidens may have a right to fill the Valkyrior void.  She also has a mouth on her.  She just needed someone to bring it out of her.  And that someone is Hippolyta.

Warrior Woman aka Hippolyta.  A total badass like Valkyrie and Misty Knight.  Arrogant and full of gloat.  Boastful about her days of fighting.  She even talked about the Asgardian armor.  I’m pretty sure she and Valkyrie will be going at it soon after their quest is completed.

I love the artwork.  Will Sliney is the artist.  Veronica Gandini is the colorist.  I especially like the cover page by Mark Brooks.  The cover pages of this title are always nice.  Kind of on the wild side.  It is one of the major selling points for me.

The Fearless Defenders is one of my favorite Marvel NOW! titles.  And I definitely plan to continue reading this awesome series.

There is no doubt that I highly recommend this title.